Improving lift on IRIS+ with other propellers

The all new IRIS+ comes with an upgraded motor as well as propellers versus the previous IRIS. While the new 920 kV motor along with the 5100 mAh 3S Lipo provides added lift of IRIS+ over the 850 kV motor of IRIS, this benefit is actually mitigated by the now shorter 9.5×4.5″ propellers. This means that while IRIS+ features a longer flight time than IRIS, the hover throttle (percent of throttle required to hover) is pretty much the same.

A loiter test flight with IRIS and gimbal and the new IRIS+ 5100 mAh battery shows a flight time of roughly 12 minutes and a hover throttle between 65% and 75% (See Figure 1).

The same loiter test flight with IRIS+ and gimbal shows a flight time of roughly 15 minutes but a very similar hover throttle to IRIS, at around 65% to 75% (See Figure 2).

This means that the flight time of IRIS did increase, but the lift performance did not. With the heavier setup of IRIS+ and gimbal, you are still at the verge of 70% hover throttle making your IRIS+ a “very underpowered copter” according to http://copter.ardupilot.com/wiki/ac_throttlemid/).

The reason for the improved flight time can quickly be found by looking at the Ampere drawn during the flight. IRIS with the 850 kV motors draws more current during a hover test (See Figure 3). It is around 17-18 A.

Figure 3: Current drawn during flight with IRIS on 5100 mAh battery

During the same kind of hover test, IRIS+ with the new 920 kV Tiger motors only consumes about 15-16 A.

Figure 4: Current drawn during flight with IRIS+ on 5100 mAh battery

How to improve lift performance

In this post I will therefore show you how to improve the lift performance of IRIS+ by using 10×4.7″ SlowFly propellers.

The following material and tools are required: 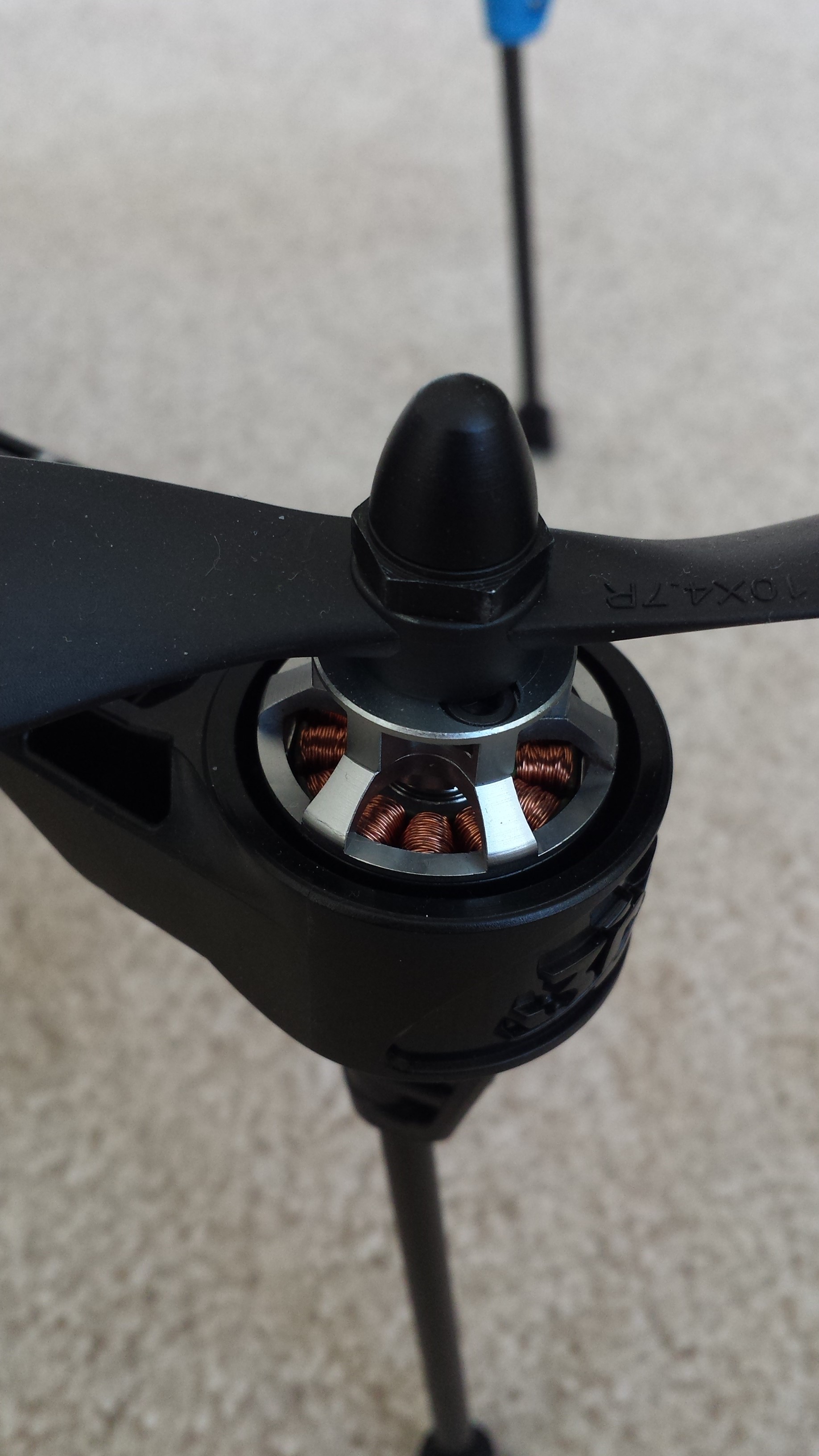 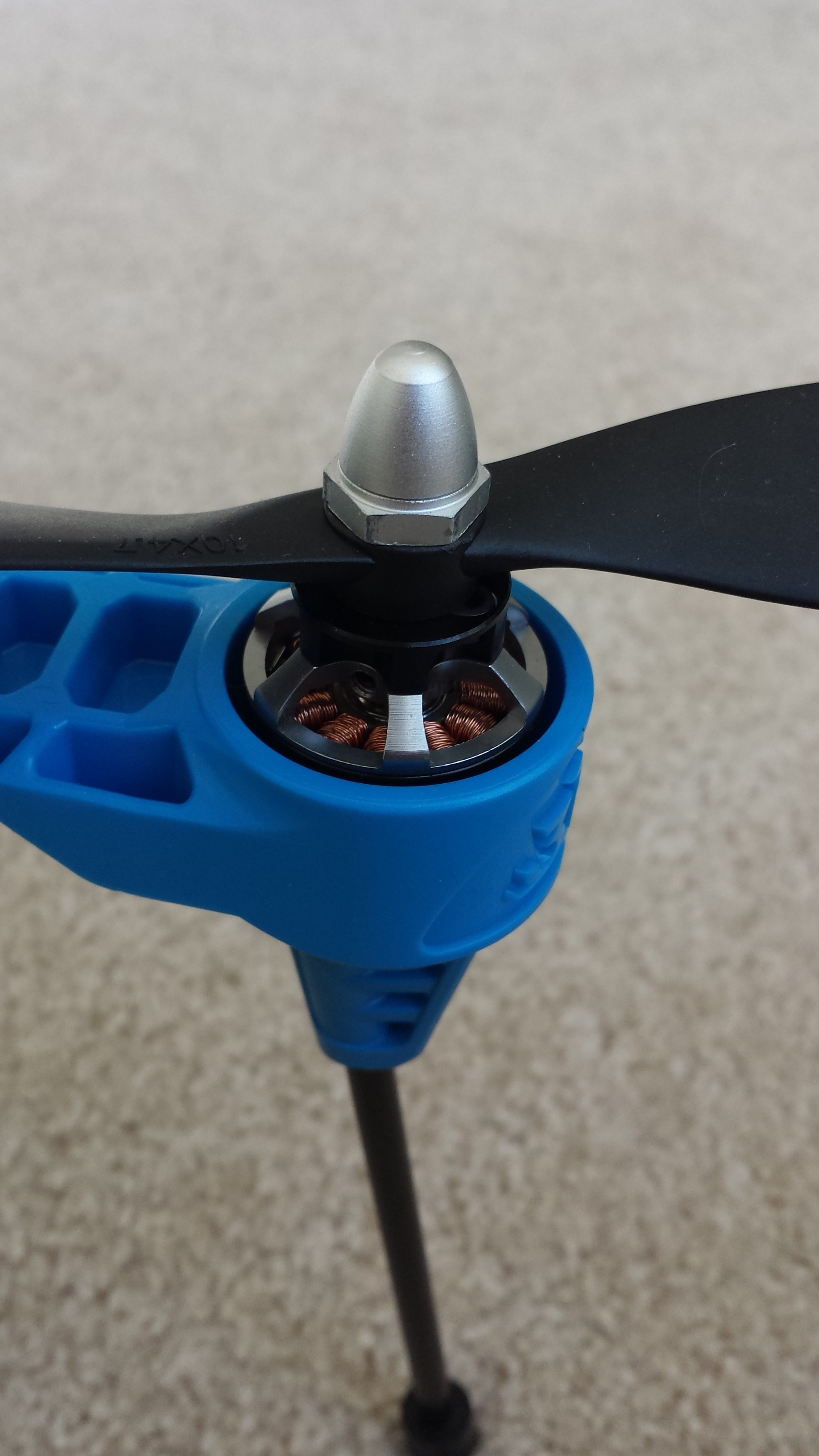 We are now ready to test our new propellers with either a Loiter test or a real mission. Figure 5 shows a Loiter test: Hover throttle is between 55% and 65% and flight time is also around 15 minutes.

Note that you cannot compare the flight time in Figure 5 with the one in Figure 2 as I did not initiate the landing based on the same condition (voltage or mAh drawn).

Figure 6 shows an auto mission flown with IRIS+ and a full FPV kit (All up weight 1665g) on HQProp 10×4.7 Slow Flyer propellers. The mission continues beyond the 11 minute mark shown in the graph.

Looking at the current drawn with the 10×4.7″ propellers, we can see that it is at around the same level as with the 9.5×4.5″ propellers (See Figure 9). The more “spiky” Amps curve is caused by slightly higher wind during this test than with the original props.

Figure 9: Current drawn during flight with IRIS on 5100 mAh battery with 10×4.7″ propellers

The only drawback of using these 10×4.7″ propellers vs. the stock IRIS+ 9.5×4.5″ propellers is that they are not spin on/off propellers. It therefore takes a bit longer and requires tools to mount or un-mount the propellers.

But in return they provide you great lift capacity for the rather heavy IRIS+. Therefore after a few dozen test flights with 10×4.7″ propellers, I’m certainly not thinking about mounting the 9.5×4.5″ propellers ever again. I’ve flown the quad at  40 kmh / 25 mph in high wind and gusts at even 100 m / 300 ft altitude, without noticing any bad behavior.